Is Rapid Recovery Real? The Doubting Thomas (aka Rios) 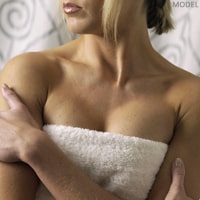 This is the second most common question I get when meeting someone at my Illinois practice to discuss breast augmentation: “Is there really such thing as rapid recovery?” The short answer is yes, although I was not a believer when I started either.

My first exposure to breast augmentation was when I was a resident in plastic surgery. The attending surgeon made the incision, inserted the urethral sound (looks like an overgrown metal candy cane) under the chest muscle (pectoralis major), and just started moving it in and out to make a space underneath the muscle. He pulled it out, and blood followed. He placed surgical gauze on the breast, grabbed my hand, and said “hold here.” He did the same on the other side and instructed me to apply pressure again. This was a busy practice, so I saw this over and over, assuming it was the “right way” to perform a breast augmentation. I would see most of these patients the next morning and could not believe that women would actually choose to have a breast augmentation. They were wrapped in gauze or a bra, taking hydrocodone (Vicodin®) every few hours, arms always at their sides, and they seemed scared to breathe!

Thankfully, a residency gives you the opportunity to see how different surgeons approach the various plastic surgery procedures we perform, and I was lucky enough to spend time with someone who is likely considered by most to be the maestro of rapid recovery. The surgery was quick but safe. There was no urethral sound. No blood. No wraps or binders. The patient was sent home on over-the-counter pain medication, instructed to do her arm exercises, and that was it!

I took the procedure back to my patients and did everything as I had learned, except one thing: I gave them all Vicodin prescriptions. After all, I had seen the results of the other breast augmentations and I couldn’t let these women go home without some form of pain control. That would have been cruel in my eyes. I made a point to ask all of the patients on follow-up visits about their use of the pain medication I had prescribed. To my surprise, the majority had taken between 0 and 4 of the pills. By the time I reached private practice, the Vicodin prescriptions were no more; they simply were not needed.

It’s been a decade and I still routinely get the question about the ability to get back to everyday (non-strenuous) activity in a couple of days. I understand their doubt — I saw the rapid recovery technique myself and did not believe at first either. There is indeed more than one way to skin the cat, and some of those ways make breast augmentation a very painful procedure. I’m not sure why some surgeons persist on that path, but there are other ways. “And yes, they’re real.”